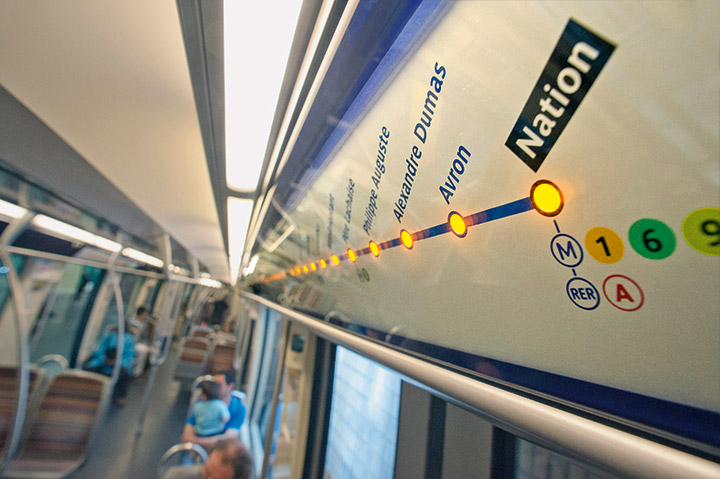 The quick and easy way to travel around the city, as well as the best value. The Paris metro has around 300 stations, their entrances marked by a big yellow “M”, and 16 lines, numbered from 1 to 14, 3 bis and 7 bis.Each line has a colour, which you’ll find on signs in the stations and on all the RATP maps.

Each line has two directions, indicated by the terminus station at each end (for example: Balard/Créteil). The different directions and connections are clearly displayed on blue and white signs on the platforms and in the tunnels. To be sure you’re heading in the right direction, check that your destination is on the list of stations just before you go down onto the platform. Inside the trains, you’ll find network maps and the detail of the line you’re on along with all available connections to other parts of the network.

Maps of the public transport network, in all shapes and sizes, are available free of charge at the ticket offices, as well as at the all the information centres of the Paris Convention and Visitors Bureau. Large-scale maps are also displayed on the platforms and at the entrance to each station.

The metro operates every day including public holidays from around 6am to 0.30am.

Don’t hesitate to travel by bus, it’s a great way to discover the city. There are a wide variety of routes, many of which go though the city centre, along the Seine River banks or through well-known historical areas.

The bus network with its 59 routes perfectly matches and complements that of the metro. The installation of special bus lanes along the main roads has improved journey times. For an idea of your journey time, allow around 5 minutes per stop, sometimes more if the traffic is busy.

Buses operate from Monday to Saturday from 7am to 8.30pm or thereabouts. Some bus lines also operate in the evening from 8.30pm until 0.30am, in particular those that begin at train stations or serve major metro and RER links, as well as the 3 circular PC routes. Around half of the buses also run on Sundays and public holidays.

Bus stops can be either glass-covered shelters or simply poles. They display the numbers of the buses that stop there and the itinerary of each. There are also details of the first and last departures, and the average waiting time between buses. In bus shelters, electronic displays show the number of minutes before the next bus for some routes.

The number and terminus are displayed above the driver at the front of each bus, and on the sides. You must indicate to the driver as he approaches if you wish him to stop. In general you must get on the bus at the front and get off by the middle or back doors, except for the articulated “bendy buses” where you can get on or off at any door by pressing the button beside the door. Remember to punch your ticket in the machine as you get on or show your pass to the driver.

You just missed the last metro or you’re too early for the first one at 6am? Night travellers, the regional bus network is just for you!

From 0.30am to 5.30am, the “Noctilien” network means 42 lines throughout Ile-de-France and increased frequency, better visibility (clearer signage), greater access and improved welcome!

Extending the former “Noctambus” and “Bus de nuit” (night bus) lines, almost doubled, the “Noctilien” will allow both residents and visitors to make the most of Paris by night and still be able to get home easily! You can use your travel pass or a metro/bus ticket if it covers the zones concerned (the same zones as for the metro/RER).

The RER is a huge rail network covering most of the Ile-de-France region. It consists of 5 lines referred to by the letters A, B, C, D and E. Within Paris, the RER operates in more or less the same way as the metro, except that you need to put your ticket through the automatic barriers a second time on the way out. If your RER station has a connection with the metro, you can use the same ticket for the whole journey.

Using the RER, faster than the metro because stops are less frequent, you can cross Paris in 15 minutes. It operates every day, including public holidays, from around 6am to 0.30am. The regularity of the trains is similar to the metro, although you may have to wait longer for trains to certain suburban destinations. Screens on the platforms display the departure times of the next trains, and notice boards indicate the full timetable.

When travelling outwards to the suburbs, once on the platform, make sure to check that the stop you want is indicated on the electronic destination boards. Maps of the network and details of the line can be consulted on the platforms and inside the trains.

Example of a journey on the RER
For example, you want to travel from Place de la Madeleine (“Madeleine” station) to the Château de Versailles (RER C “Versailles-Rive Gauche”). You can purchase your ticket through to Versailles at the ticket offices or machines in “Madeleine” station, at an approximate cost of €2.50 one-way (the price is the same from any station in Paris). Take line 8, direction “Balard”, and get off at “Invalides” station where you change on to the RER, line C, direction “Versailles”, to “Versailles-Rive Gauche”.

By Transilien (Suburban trains)
These trains depart from main-line stations in Paris (Nord, Est, Lyon, Austerlitz, Montparnasse and Saint-Lazare) and follow the same pricing zones (from 1 to 6) as the RER. Tickets and travel passes can be purchased at the “Ile-de-France” ticket offices and machines in the stations, as well as in metro/RER stations.
Free timetables are available at ticket offices in the stations. Suburban lines complement the RER network, sharing several links

Metro, RER (Suburban express railway)
A single metro ticket costs €1.70, and can be used for one journey, including all connections.

White-coloured tickets can be purchased singly or in a book of 10 (“carnet”) for €13,30, at the ticket offices or machines in metro stations, and also in some tobacconists.

Keep hold of your ticket until you have completed your journey, as you may be asked to show it if tickets are being inspected. If you cannot produce proof of payment for the ticket inspectors, you may risk paying a fine.

This ticket, valid for zones 1 and 2, allows you to travel anywhere in Paris, and even beyond, since it will take you to the end of each metro line, even if it is located in zone 3 (as for example La Défense on line 1).

You can also choose a Monthly or weekly Navigo Package. These can be purchased from the ticket offices or machine in the stations, their prices vary depending on the travel zones covered (see Passes and reductions). You will need a passport-sized photo for these passes, obtainable from the photo booths in some metro stations (make sure you have the correct change).

As well as the book of 10 tickets (“carnet”), giving you 10 trips at a reduced rate, several travel cards allow you unlimited travel for 1 or more days, a week, a month or even a year, over the whole public transport network (metro, RER, bus, tram, suburban train, Montmartre funicular), corresponding to the different fare zones.

Be careful : travel pass coupons must be inserted in the automatic barriers in the metro and RER, but must not be punched in the machines on the buses. Just show your card to the driver as you get on the bus.

These travel passes can be purchased in main metro and RER stations, in SNCF train stations in Ile-de-France and in Paris airports. Certain passes are also available at the Paris Convention and Visitors Bureau.

Mobilis
A 1-day pass covering (except airport services) zones 1 & 2, 1 to 3, 1 to 4, 1 to 5 or 1 to 6. The non-transferable ticket voucher can be purchased in advance and you should fill in the date you decide to use it. NB: this card is valid for one full day and not for 24 consecutive hours, meaning the whole day would be counted even if you only start to use the pass at 8 in the evening, so it is far better start first thing in the morning!

Paris Visite
This pass is valid for 1, 2, 3 or 5 consecutive days in zones 1 to 3 or 1 to 6. The coupon slides into a card specifying your name, a photo is not required. The coupon can be purchased in advance and you should fill in the date you decide to use it and the number of the card. NB: this card is valid for full days and not for 24, 48 or 72 consecutive hours, meaning that a whole day would be counted even if you only begin to use it at 8 in the evening, so it is far better to start first thing in the morning! As a rule, when you buy your coupon, the ticket seller will receive a « Paris Tourisme » map and an SNCF map. But if not, do not hesitate to ask for them.